I’m not talking about the stereotypical woman who suffers from “female problems” and kills her husband and children in a fit of rage. I’m talking about creating a fabulous, totally believable antagonist for your novel, using Sean Mactire’s book Malicious Intent: A Writer’s Guide to How Murderers, Robbers, Rapists, and Other Criminal Think. And while the husband and kids might be at risk, there’s more to it than that.
Mactire says, “the main reason that women killers receive less attention is the societal perception of women as nurturers and caregivers. It is almost impossible for many people, even when confronted with the evidence, to accept the idea of women as ‘killers.'” For this reason, females make awesome antagonists because they are unexpected.
Female serial killers are quiet and rare, so they’re harder to catch. They’re harder to profile. And they’re usually psychotic. They are almost always more lethal and efficient than men, which is why they are able to remain hidden for so long.
Mactire lists three categories of female serial killers:
1. Black widows
2. Nurses
3. Terrorists and assassins. 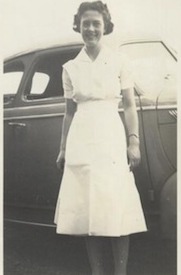 (This isn’t a serial killer, by the way, it’s my Grandma Betty)

Black widows are those who kill husbands, children, other relatives, employees, and anyone else within their sphere of influence. Serial killer nurses are the “angels of death” or “angels of mercy” who kill those under their care. Terrorists and assassins kill for non-personal reasons, usually for money or political reasons.
Mactire offers some unusual statistics: “Of the known female killers, the body count averages eight to fourteen victims per offender, which is a higher than the average of eight to eleven victims for male killers.” Keep this high body count in mind when using a female killer for your antagonist.
In my next post I’ll discuss the characteristics of female killers. You won’t want to miss that.
-Sonja

One thought on “Women Who Kill”